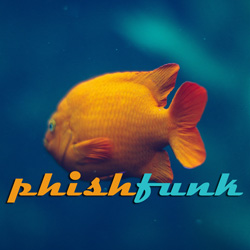 Phish Funk is an artist name used by John and Dave. The first Phish Funk track was "Retro Fever" from 1999, which used a filtered disco loop and was produced by John. At the time, this tune was intended as a one off, but in 2002 another track "Phenomenon" was produced. This time, Dave collaborated on the track with John over the internet, and it proved to be a big online hit for Toucan, reaching the top downloads chart in 2003, and featuring in the most played tracks chart for 2003, 2004 and 2005. In 2002, John also used the Phish Funk name for a funky / hard house remix of "Buggin Me" by Project Ex, which was released on vinyl through Wanna B records.

In January 2005, two new tunes were produced- "Stargazing" and "Bath Taps", again collaborations between John and Dave, with John providing the samples and synth sounds, and Dave providing the funky bass and assisting with the beats. Another collaboration in 2006 was "Peru", which kept the funky sounds but added some latin American influences, and in 2007 the pair joined forces again for "Aquarius" which kept the funky house feel but added more contemporary house beats.

Although slowing down in recent years, the Phish Funk sound is faster than a lot of modern funky house, with tracks usually between 130bpm and 140bpm, and the instrumental nature of the music and lack of soul influences (no original Phish Funk tunes have ever featured a vocal) is also unusual for the genre.