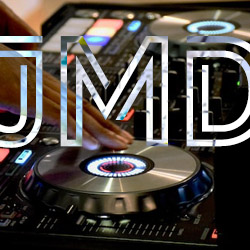 John produced trance under the JMD alias between 2003 and 2010. Combining melodic and tech trance sounds with a harder edge, the trademarks of the JMD sound are heavily phased synth pads and stabs and, more recently, rippling arpeggios and gated synths.

John worked on several JMD tracks in 2004, but during the year, the remixes gained a higher profile - with Time On Your Hands by Redmann, House Trancefusion by Risey both getting the JMD treatment. In 2005, the JMD sound started getting less commercial, becoming more minimal, pure synth driven trance. This was evident in JMD’s remake of Thirty One and new track Black Magic. This style continued into 2006, by which time JMD had added a more electro feel to the sound, seen on tracks such as Futuristic Sound. At the end of the year, a slightly slower, more tech-trance sound was used for JMD’s remixes of So Sublime and Another Boring Lunchtime, and in 2007 this sound was taken forward for JMD’s own productions Hold My Breath and Frontline.

In 2008, influenced by producers such as Armin Van Buuren, Above and Beyond, Marcel Woods and Tiesto, the JMD sound slowed down again slightly, and introduced a heavier bass driven feel to complement the melodic uplifting synth leads as evident in Polar. This style has continued into 2009 and 2010, with tracks such as Jetstream and JMD’s 2010 remix of On Target.

In 2011, John decided to retire the JMD name to focus on other projects. The last JMD outing was the 2011 remix of Redmann’s Force Of Nature, which was followed in 2012 by the release of Remix and Additional Production By JMD, a remastered compilation of 18 of JMD’s favourite remixes.

Download track
“Excerpt From The Rift” by sea.envy [JMD remix] 2009