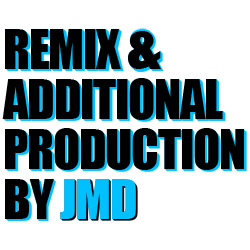 JMD presents 18 of his favourite remixes from 2004 to 2012 in this collection. After introducing his hard yet melodic trance sound in 2003, JMD's first remixes were in 2004 and featured a hands-in-the-air epic trance feel with enormous breakdowns influenced by UK hard trance producers at the time. One of JMD's most successful early remixes, his reworking of House Trancefusion by DJ Rise (later Risey) in 2004, narrowly missed being the most downloaded Toucan Music track between 2004 and 2007 while reaching our top ten chart four successive years. By 2005, JMD started to promote a more underground sound while retaining his trademark sizzling synth arpeggios, and produced some of his most popular remixes in this style including reworkings of One Five Eight and Scorpion. By the end of 2005 and into 2006, the JMD's style became more experimental, ditching the arpeggios and introducing sidechaining - then a fairly new technique - and lush pad and stab riffs, evident in his remixes of Stratosphere and Plastic Explosive. During 2007 and 2008, the hands-in-the-air riffs returned in remixes of Pattaya Sun Rise and Turbulence, though JMD had by this stage dropped the tempo from 140 - 142bpm to a slightly more sedate 135 - 138bpm, having been influenced by the European trance scene, and between 2008 and 2010 JMD introduced punchier kick drums and rhythmic basslines in tracks such as his remix of Aquarius, replacing the off-beat bouncy bass of older tracks. By 2012, JMD had switched off his arpeggiator for good, working on other projects under different artist names. Completely remastered for the album, and available in DJ friendly, full length high quality MP3 format to download free of charge, this compilation is sure to keep that JMD vibe alive and get the dancefloor pumping once again.

Remix and... by Redmann is licensed under a Creative Commons Attribution-NonCommercial 3.0 Unported License which allows you to re-use these tracks in your own videos, DJ mixes and podcasts providing you are not making a profit.